“All Things Come from Splendor”: The Poet Laureate Charles Wright 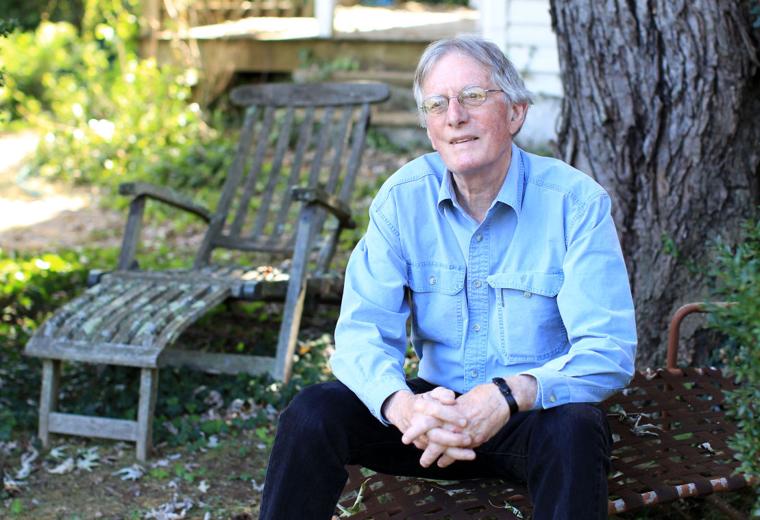 Such beautiful depictions of nature penned from this backyard.

I was excited last summer when I heard that Charles Wright would become the Poet Laureate of the United States. I am drawn to the way he meditates on the weather and the change of seasons as though they are life-giving texts and discerns meaning about himself and his mortality. He translates the language of the landscape for us in his long meditations: “The language of nature, we know, is mathematics. / The language of landscape is language, / Metaphor, metaphor, metaphor, / all down the line.” Everything in his simple, Charlottesville backyard draw him closer to his innermost depths.

To celebrate (belatedly) our new poet laureate, I would like to look at his book, Littlefoot, published in 2007 and written in the seventieth year of the his life. As a book-length poem, it gradually leads the reader through one year, from one October through another October. For Wright, linking meditations to seasons is a matter of necessity since “Outside the cycle of seasons, / our lives appear meaningless.” The very nature of the book is to present a cycle of seasons in which the speaker meditates on his own mortality. He begins in the first October with a focus on how “You can’t go back, / you can’t repeat the unrepeatable,” but by the next October his focus is refined and he instead wonders if “the give in the natural world / Is as good as the take in the supernatural other.”

This meditative focus on the shaping nature of the change of seasons creates a slowness that borders on eternity. There’s time for themes to gradually burgeon from canto to canto. There’s “Time to pull up the tie stakes. / Time to repoint the brickwork and leave it all to the weather. / Time to forget the lost eyelids, / the poison machine, / Time to retime the timer.” Even the formatting frees the reader to share the poet’s leisured pace; the poems fill the page, while some lines are split with the step-down line tabbed over to the margin. There’s even time for both speaking and thinking as meditations and lyrics are set apart from one another on the page.

Paralleling Flannery O’Connor, there’s time to pay attention to the sky. However, this meditative interpenetration of eternity is contrasted by a focus on mortality. There may be time to look at the sky, but that very sky is showing us our own loss: “Like clouds once again in their long drift, / there’s no coming back—” Though time is slow and undulating in Littlefoot, it is moving toward an end as the canto of the first October cycles to the ”End of October, end of a buffed and edgeless day” and the poetry of timelessness finds its end between the finite limit of two covers.

BUT in the end, the habitual rising and setting of the sun, coupled with the long evenings of stargazing and headlights, brings Wright to his central realization:

Who knew it would take so many years to realize / —Seventy years—that everything’s light— / The day in its disappearing, the night sky in its distance, false dawn… / that all things come from splendor?