Spring is a time for pilgrimages. Along with the insects, shoots, and flowers, we’re waking up. We can leave our solitary heated rooms and travel together to the homes of beloved authors. It is a time, to breathe the same sweet air of past generations, like Gerard Manley Hopkins did:

Yet ah! this air I gather and I release
He lived on; these weeds and waters, these walls are what
He haunted who of all men most sways my spirits to peace.

As moderns, we’ve lost this ritual. We don’t want to be woken up. We prefer the lethargy of shaded rooms and the pseudo-pilgrimages of screens. When T. S. Eliot writes that “April is the cruelest month,” he is subverting Chaucer’s famous line from the General Prologue of The Canterbury Tales: “Whan that april with his shoures soote / The droghte of march hath perced to the roote.” Instead of traveling to Canterbury in honor of Thomas Becket, we long for the winter that “kept us warm, covering / Earth in forgetful snow.”

But we don’t have to be surprised by summer. In the spirit of Chaucer’s pilgrims, I left the “unreal city” and journeyed to Flannery O’Connor’s Andalusia Farm in Milledgeville. I’m not a city person, so I felt myself relaxing as Atlanta traffic gave way to dairy farms and tractor dealers. We had some O’Connorish podcasts planned, but listening to “A Good Man is Hard to Find” just didn’t seem quite right on a road trip. So instead we looked for a Southern Gothic playlist:

When we got to the house, I was excited to walk up these same steps. 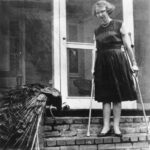 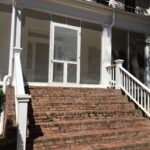 Past the spacious covered porch on the left is Flannery’s bedroom. As someone with lupus, she would need to be on the first floor, but I’m still amazed she made it up the steep steps in the front.

Something about the room with its old bed and airy windows set in cracked walls reminded me of “The Enduring Chill”:

Holding onto the banister, he pulled himself up the steep stairs, across the landing and then up the shorter second flight and into his room, a large open airy room with faded blue rug and white curtains freshly put up for his arrival. He looked at nothing but fell face down on his own bed. It was a narrow antique bed with a high ornamental headboard on which was carved a garlanded basket overflowing with wooden fruit.

…he lay for some time staring at the water stains on the gray walls. Descending from the top molding, long icicle shapes had been etched by leaks and, directly over his bed on the ceiling, another leak had made a fierce bird with spread wings. Next is the dining room. Seeing a copy of Flannery’s self-portrait in person, I couldn’t help thinking that this should have been the commemorative stamp. I also kept telling myself that the tchotchkes were Regina’s (Flannery’s mother) but I’m not so sure. We found this treasure in the laundry room. I asked and it seems that this little Therese portrait is original to the house. It might seem strange at first to associate our image of O’Connor’s dark stories with a Carmelite nun, but there is a kinship between the two brilliant writers with their short painful lives.

O’Connor describes her reaction to seeing a portrait of Therese in The Habit of Being:

I have just read a very funny book by a priest named Fr. Robo—on St. Theresa of Lisieux…. He has managed (by some not entirely crooked means) to get hold of a photograph of her that the Carmelites have not ‘touched up’ which shows her to be a round-faced, determined, rather comical-looking girl. He does away with all the roses, little flowers, and other icing. The book has greatly increased my devotion to her.

Outside, the peacocks and peahens may not be wandering the grounds anymore, but they can still have the last word from their perch. 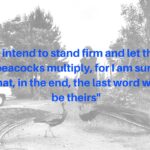 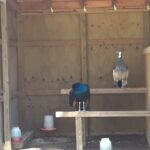 The Hill house looks like something out of an O’Connor story. This 19th century plantation cottage was the first house on the property. Can’t you just see Mr. Shiftlet walking up to it?

The old woman and her daughter were sitting on their porch when Mr. Shiftlet came up their road for the first time. The old woman slid to the edge of her chair and leaned forward, shading her eyes from the piercing sunset with her hand. The daughter could not see far in front of her and continued to play with her fingers. Although the old woman lived in this desolate spot with only her daughter and she had never seen Mr. Shiftlet before, she could tell, even from a distance, that he was a tramp and no one to be afraid of.

We ended our pilgrimage with the last plot of ground where Flannery ended. In the last few minutes, I kept thinking how different this felt from our pilgrimage to Faulkner’s Rowan Oak. I’m still not sure why, but I think there’s something to how these two “postage stamps of soil” influenced and were influenced by the personalities of the authors. 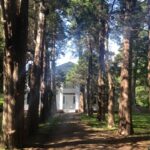 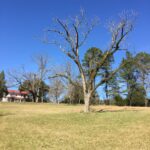