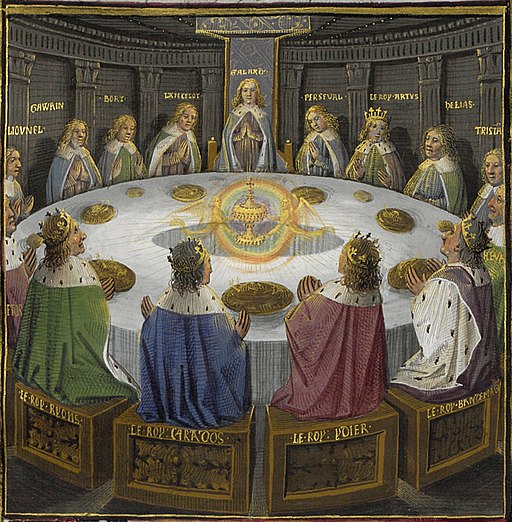 Did you know that today is an important day in the high order of knighthood?

I’ve been reading a lot of Malory lately for my exam lists. He’s an important source for Victorian medievalism like Tennyson’s Idylls of the King. I’ve been reading so much that if I have to read about one more joust, I might just lose it. I mean, do you have to challenge every knight you meet? And what about checking if the knight is an ally before issuing the challenge (we’ll talk more about chivalric face blindness in a later post).

But besides jousting, reading Malory’s Le Morte Darthur means a lot of liturgy too.

Every year on this day, King Arthur would have a special feast where all the knights of the Round Table gathered. As was his custom he would not sit down to his festal meal until witnessing some marvel.

Today, he would celebrate Pentecost and the double anniversary of his coronation and his marriage to Guinevere.

It was on this day, when the barons finally stopped stalling (I mean he pulled the sword from the stone around Christmas) and Arthur was crowned. I suppose in defense of the barons they didn’t know that he was Uther’s son, and they all wanted a chance to pull the sword from the stone themselves. But hey, after Candlemas (February 2nd), give it up.

As Malory presents it:

And at the feast of Pentecost all manner of men assayed to pull at the sword that would assay, but none might prevail but Arthur, and pulled it out before all the lords and commons that were there; wherefore all the commons cried at once “We will have Arthur unto our king, we will put him no more in delay; for we all see that it is God’s will that he shall be our king. And who that holdeth against it, we will slay him.”

“Samite” is a good Malorian touch.

So the next time you hear that Arthur isn’t king because “supreme executive power derives from a mandate from the masses,” show them this passage. Oh and if they call, a damosel of the Lake a “watery tart,” then I think you know what chivalry requires of you.

Not only is this the anniversary of his crowning, but his wonderful, faithful, amazing, inspiring marriage. And he got the Round Table itself out of it.

What a wedding gift! It’s round and magical and each seat tells you who’s supposed to sit there. And then there’s the siege perilous that can’t be sat in until the best of all earthly knights, the knight who will fulfill the grail quest, comes.

By happenstance, I began Malory’s section on the grail quest yesterday exactly where it begins: the eve of Pentecost.

There’s something satisfying in realizing that you’re about to celebrate the same day as the characters that you’re reading about.

So why don’t we take a moment and look together at the theophany that the knights of the Round Table experienced today:

And then the King and all the estates went home unto Camelot, and so went unto evensong [here’s an example of Sarum vespers] to the great monastery; and so after upon that to supper, and every knight sat in his own place as they were beforehand. Then anon they heard cracking and crying of thunder, that them thought the palace should all to-drive [shatter]. So in the midst of the blast entered a sunbeam more clearer by seven times than ever they saw day, and all they were lighted of the grace of the Holy Ghost. Then began every knight to behold other, and either saw other, but their seeming, fairer than ever they were before. Not for that there was no knight might speak one word a great while, and so they looked every man on other as they had been dumb.

There’s something quite beautiful about this moment when all these battle-hardened knights turn to one another and see each other as “fairer than ever they were before.” Though they share in the fellowship of the Round Table, these men have not always been friends. Some like Tristram and Palomides are frenemies at best.

So today is a day to go on quests, to get magical tables, and most importantly to see the goodness of your fellows.

But don’t get married today. Just put it off for a little bit. Oh and don’t invite Lancelot no matter how much a perfect flower of knighthood everyone says he is.