What do you think of when I say punk rock? Probably some suspiciously angry kid with chains and leather and spikes. Maybe a DIY ethic at odds with the industry. Or a hastily drawn anarchy sign that’s more fashion than substance.

But do you think poetry when I say punk?

Why not? Let’s think about this. Where’s the dividing line?

I don’t ask questions, don’t promote demonstrations
Don’t look for new consensus, don’t stray from constitution
If I pierce the complexity I won’t find salvation
Just the bald and overt truth of the evil and deception

But hey, if Hopkins can masterfully rhyme “man” with “can” in “Spring and Fall,” then go for it Greg.

Okay, then maybe it’s the mixture of the politics and noise. How can the cacophony of anarcho-punk be poetry?

But we forget how much of a subversive revolutionary Blake was for his time. I mean the guy wore a red hat. A. Red. Hat. And poetry isn’t always nice. Take a look at Anthony Hecht’s “More Light! More Light!”

What if I told you that there was a song that crumpled these lines and threw them away? A song where poet and punk collaborated. 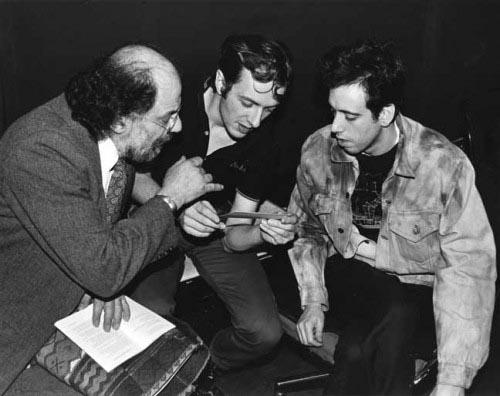 In 1982 Allen Ginsberg, the beat poet who “saw the best minds of [his] generation destroyed by madness,” collaborated with the Clash.

And the result was Ghetto Defendant

That’s Ginsberg crooning in tandem with Strummer’s singing. Between the two, we have a rich image of addiction in the city mixed with metaphors of punk’s prophetic response to the world’s institutions: “slamdance cosmopolis / enlighten the populace.”

And then everything stops, the music, the harmonica, and Strummer’s voice comes the closest it will to Ginsberg’s spoken word and we get this image of the punk as poet:

Strummer: The ghetto prince of gutter poets
Was bounced out of the room
Ginsberg: Jean Arthur Rimbaud
By the bodyguards of greed
For disturbing the tomb
1873
His words like flamethrowers
Paris commune
Burnt the ghettos in their chests
His face was painted whiter
And he was laid to rest
Died in Marseille

Rimbaud was a French poet of the late 19th century who influenced the Surrealist movement (you can read more about him here). The Ghetto Prince is still a prince and gutter poets are still poets. His prophetic words are flamethrowers, burning the ghettos out of our chests. The ones where we don’t care about the “methadone kitty,” where we disdain the “poor worker” and the “addict of metropolis” who are “walled out of the city” and “forced to watch at the feast.”

But this is just a punk song, not poetry.

Ever notice that you can run a search on a poem and find interpretations and contextualization and a whole bunch of information, but if you search for your favorite song, the best you can hope for is that the lyrics will be accurate?

Where’s our analysis of “flipped pieces of coin” juxtaposed with “broken bottles?” Where’s our theory of dialogue between Ginsberg and Strummer? Where’s the psychoanalysis of Bad Brains’ “I Against I?” And don’t get me started on how there should be a Poetics of Patti Smith.

We seem to think that to interpret is to control and contain and treat something as lesser, so we want music and listeners to be free. Go for it. Let Ghetto Defendant be for you what it is for you. BUT. But just think about this. What if interpretation is play, what if what we are doing is engaging and respecting the thing that’s interpreted? What if by interpreting, we say, “I see you” to the song, and by putting that interpretation to words, we make the song even more communal by sharing how it has acted upon us.

And there is nothing punk rock about doing that.

But then again, I’m doing this too. I’m not suggesting an aesthetics of GG Allin. No one wants that. I’m being selective. I’m demarcating. I’m separating the wheat from the chaff. And I’m not sure if that’s legitimate.

Thanks to Eclectic Evelyn for featuring this post on Traffic Jam Weekend Linky Party!

9 thoughts on “A Defense of the Poetics of Punk Rock”