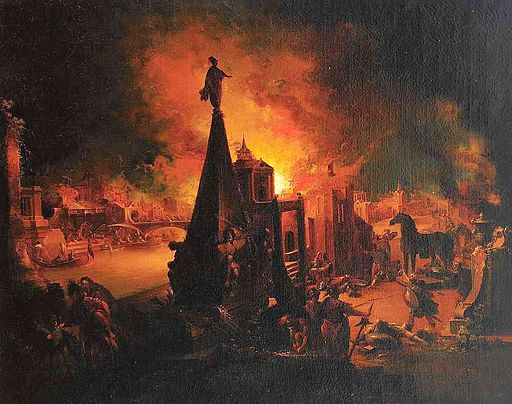 Spoiler Alert: it doesn’t go well for the Trojans

So I just ruined the ending of a novel for my wife. It was Jude the Obscure. Don’t worry, I’m not about to ruin it for you. The Golden Echo isn’t about spoilers. In fact the only spoiler on here that I can think of was actually a prediction that I wish hadn’t been true (on a side note, the day that movie came out, there was a spike in interest in that post, so I spoiled myself). But if you have read Thomas Hardy’s dark masterpiece and final novel (he wrote only poetry after), let’s just say I spoiled a certain “strange and consummate horror.”

Now before you start cursing me as a terrible husband who doesn’t respect his wife’s literary experience, let me explain. You see, she’s my editor. I need her to read everything before anyone else. I write so many dorky things that never make it into this blog due to her vigilance. I mean, like anyone who loves the Victorians, I’m really into punning, and my wonderful editor saves you from that pain at least biweekly. Same thing goes for my research. If something I write doesn’t work for the person I talk to about everything and who takes the most generous interpretation of me, then it won’t work for anyone.

So I’ve been researching Hardy and Hopkins’s presentation of Oxford in Jude the Obscure and “Dun Scotus’s Oxford,” and I needed to talk my argument through with her and have her read my drafts. While talking about it, she stopped me and said, “you just ruined the novel for me.” Distraught that one of my favorite novels could be ruined for my favorite person, I hastily replied, “Erm, but the experience is still worth it.” I know that’s weak and it doesn’t get to the heart of her complaint, but this was a life-changing novel for me so I was quite sincere.

This has gotten me thinking about how much surprise affects our experience of a narrative. There are some stories that everyone knows how they end and we still keep coming back to them. Any treatment of the Trojan war, from the Iliad to Troilus and Criseyde to Xena, is going to end with the fall of Troy. Chaucer didn’t seem to be all that concerned about spoiling the ending when he opens up Troilus and Criseyde talking about the “double sorrow” of Troilus and then spells out the whole narrative arc in the first stanza. He knows we know how it’s going to end, so why not have some fun by rhyming “Troye” with “destroyed.” Get it. De-Troyed. Sorry.

But would we want to read a detective story if we knew for certain who the murderer was? Maybe we might as well look up the summary or get lost in a wikiality rabbit hole than spend the time actually sitting down with the narrative. (Note: I am in no way supporting addictive wikiality rabbit hole reading, just lamenting our shared struggle).

W. H. Auden spells out the difference between these different genres nicely in his article on detective stories, “The Guilty Vicarage”:

Writing in the late 1300’s, Chaucer is entering into the narrative pattern of his classical predecessors where the audience already knows the truth and the importance of the narrative is to experience it more deeply.

Stories that take for granted that we already know how they end seem to be saying that the path to that end is so important that we need to sit with it and think about it and go over it again and again as a people through multiple permutations. These narratives contain a mystery that can’t be exhausted even if presented as a monster-of-the-week for a certain warrior princess.

I wonder, though, if the same thing can be said for stories that hinge on a big reveal or a twist like detective fiction. Each individual story might be ruined by knowing from the start how it ends, but what if we take the genre as a whole? What mystery, if any, could it be exploring?

Let’s go back to Auden and see what he says (SPOILER ALERT: this is from the last paragraph of the article):

The phantasy, then, which the detective story addict indulges is the phantasy of being restored to the Garden of Eden, to a state of innocence, where he may know love as love and not as the law.

These detective stories then, show us our own desire to go back, to escape our own individual guilt, our own personal suffering that we all experience. Earlier in the article, Auden defines “phantasy” and distinguishes it from “art” in this way:

I’m not defending that any time my wife reads some of my research, she risks being spoiled on a plot (though, I mostly research poetry, not novels), but even if we know what’s going to happen, we can still share in the suffering of the characters. Knowing Troy is going to be burned, that Troilus is going to die, or that Jude the Obscure is a tragedy doesn’t stop us from entering into the shared mystery of suffering.