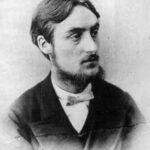 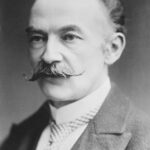 We know that Hopkins read and admired Hardy, as he wrote to his friend, Robert Bridges, “Perhaps you are so barbarous as not to admire Thomas Hardy—as you do not Stevenson; both, I must maintain, men of pure direct genius.” (By the way, don’t expect an ideal of a gentle bird-watching priest in the letters. Some of the best shade I’ve ever read has been in a Hopkins letter about Browning.)

Hopkins on Robert Browning in an 1881 letter to Dixon

With Hopkins reading Hardy, we shouldn’t be surprised to see influences in his poetry. In the sonnet, “Duns Scotus’s Oxford,” we see a presentation of the city that is reminiscent of Hardy:

Towery city and branchy between towers;
Cuckoo-echoing, bell-swarmèd, lark charmèd, rook racked, river-rounded;
The dapple-eared lily below thee; that country and town did
Once encounter in, here coped & poisèd powers…

The Oxford of these first four lines mirrors the description of Hardy’s Casterbridge. Like Hopkins’s ideal Oxford, “Casterbridge was the complement of the rural life around; not its urban opposite.” It would seem then that along with Hardy’s Casterbridge, Hopkins’s Oxford would be “but the pole, focus, or nerve-knot of the surrounding country life.”

But is there any evidence that Hardy could have been aware of Hopkins? Well, we know he was aware of a Hopkins. Arthur Hopkins, the brother of Gerard Manly Hopkins, illustrated Hardy’s novel, The Return of the Native in 1878 (learn more about the illustrations here). But, sadly, there seems to be no evidence from Hardy’s correspondence with Arthur, which is mostly preoccupied with upcoming plot points that the artist needed to know, that his brother’s poetry had been shared.

Though there is that tantalizing overlap in their respective lifetimes, the dates do not quite line up enough to suggest any reciprocal influence outside of Hopkins reading Hardy’s novels. Take a look at two of their Oxford-centered works, “Duns Scotus’s Oxford” and Jude the Obscure. According to Catherine Phillips, Hopkins wrote “Duns Scotus’s Oxford” in March of 1879, a year after his brother, Arthur, had illustrated Hardy’s novel, The Return of the Native. Jude the Obscure would then start its serial printing late 1894, between Hopkins’s early death and his first edition of poems published by Bridges in 1918.

But that means there are 10 years between the first edition of Hopkins’s poetry and Hardy’s death in 1928.

In Hardy’s book of poems, Moments of Vision, there’s another tantalizing connection. As Neil Wenborn notes, the poem, “The Last Signal,” “deploys the Welsh bardic devices of cynghanedd and union.” That’s what Hopkins would call “chiming” shared sounds together and was an important feature in much of his poetry. But, this little tidbit still doesn’t get us to a reciprocal influence because Hardy’s poems came out a year before Bridges published Hopkins.

Though these Victorian poets seem to have so many points of intersection, there seems to be no evidence that Hardy ever read Hopkins. But that doesn’t mean that they can’t meet together in our readings. In an excellent lecture that you can read here, Meoghan Byrne looks at how “The poetry of Hopkins and Hardy repeatedly expresses the living, literal intersection of the natural and supernatural in the things and places of this world.”