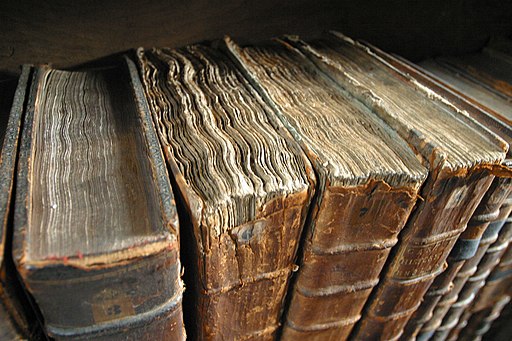 What do we do with old books? I mean really old books. How do we understand them when they seem so alien to us?

Time can seem to be the enemy of understanding. Past texts can seem cryptic. We wonder if Chaucer is as ironic as we may like to see him or if we are adding an alien idea to his age. We then create methods and develop theories to close the gap between past and present. We try to reconstruct the past or even the mind of the author.

But what if it was a good thing that so much time had passed since when the book was written and when we read it? What if that was exactly what we needed to understand it? That’s where hermeneutics comes in.

Now, when I say hermeneutics, I don’t mean reading the Bible. Well, not quite. The religious practice of exegesis is where this all started. But what I mean is looking at how we understand–what happens when we understand. This is called philosophical hermeneutics, and one of its developers, Hans-Georg Gadamer, proposes that the time that separates us from a past text is the very thing that helps us understand it.

Let’s take a step back before diving into what this idea of temporal distance means. Following another philosopher, Wilhelm Dilthey, Gadamer thinks of the human person as a historical being primarily. As historical beings, we stand in the river of time, and through this metaphor of the river, we have access to remnants and ruins of the past.

This can sound like a conceptual tool that we can pick up to survey the past, but I suggest another way to look at it. Remember, the framework here is not so much a method to interpret, but looking at the phenomenon of understanding. Instead, this is part of the nature of understanding texts from the past.

For instance, a modern reader approaching a medieval text may be nervous that too much has changed and that the different concerns and forms of expressions may be alienating and inhibiting for understanding. Gadamer proposes, though, that this very distance that makes us wonder how we can understand a text actually enables understanding.

To illustrate this, let’s move from the time as a river metaphor and think about it as a chasm. We’re on one side in the present and the moment that the old book was written is on the other. How do we get to the book? Maybe we make a bridge or try to jump to the other side.

Gadamer suggests another way to look at this chasm. Instead of thinking of ourselves on a sheer cliff separated from the other side, he reminds us that every expanse has to be supported by ground underneath. What seems to be an absence, the abyss at our feet has a canyon floor. That same floor that makes the gap possible also lifts up our side in the present and the other side in the past. 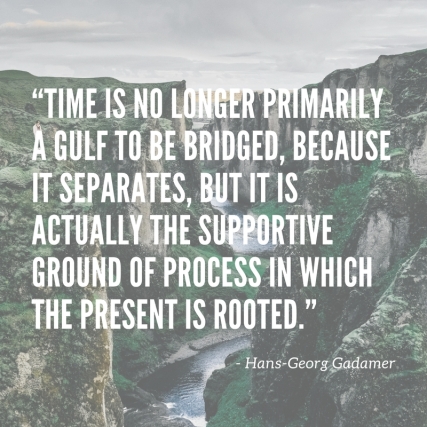 The way Gadamer puts it is that “time is no longer primarily a gulf to be bridged, because it separates, but it is actually the supportive ground of process in which the present is rooted.” When we look at it this way, then we can see that “temporal distance is not something that must be overcome,” but rather the very thing that enables our understanding.

But how can this be when there’s still the gap between us and the past. Does he expect us to just jump into the abyss?

Returning to the chasm metaphor, Gadamer proposes that the distance “is not a yawning abyss, but is filled with the continuity of custom and tradition.” No relic or remnant comes to the present completely emptied by the distance, or as “an estranged being made available to the experience of a later period” as Gadamer would put it. Instead it is actively preserved by tradition. Consider the Breton lai, “Sir Orfeo.” The poem needed to be written by scribes, preserved by archivists, and edited and printed in editions to endure from 1330 to today. The genre of the lai itself was handed down to the author of “Sir Orfeo” through the historical process of tradition. At the same time, the distance from 1330 means that we as readers are not in memory of the reign of Edward II, but we have maintained the tradition of the Orpheus myth. Through all this, Gadamer presents “written tradition” as “to such an extent pure mind that it speaks to us as if in the present.”

What does all of this mean for us as readers? In the past, hermeneutic thinkers were concerned that objective knowledge would be inhibited by including too much of the reader’s self, but Gadamer’s view of hermeneutics welcomes the full person in the act of understanding. Rather than being a Cartesian subject leveraging reality into place with the Archimedean point of the cogito, the reader comes to the text with all of his or her prejudices whether correct or incorrect.

The word prejudice here is a little different than what we usually think of it. It’s not being used as mistreatment of a human person whom we must be open to as a thou and never treat as an it. Instead, prejudice is a pre-judgment, something  that we bring in ourselves to a text. In this sense, prejudice is unavoidable. If you assume that there is meaning in a book, that’s a prejudice in this sense. If you conduct an experiment and use the scientific method, then you have a prejudice that the world is intelligible, and without that prejudice you won’t be able to understand through the scientific method.

The goal for Gadamer is not to do away with prejudices right away since some could enable understanding. Instead, the danger is in hidden prejudices, which are brought out from hiding through temporal distance. When we encounter a text, brought to us through tradition, and that text addresses us, then we must suspend our prejudices. That is the moment of openness to the text, the moment of the question where we put our own prejudice, both the ones that would be tyrants if hidden and the ones that enable understanding, at risk. In that same suspended moment we place ourselves “within the process of tradition, in which past and present are constantly fused.” In this moment, we are open to both the text and tradition as thous.

So pick up that old book that you’ve been putting off and let it address you. Let your prejudices be put at risk. Encounter the text. Encounter the past. 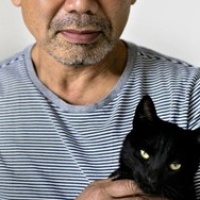