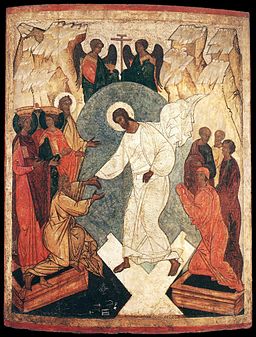 O Death, Death, He is come.
O grounds of Hell make room.
Who came from further than the stars
Now comes as low beneath.
Thy ribbèd ports, O Death
Make wide; and Thou, O Lord of Sin,
Lay open thine estates.
Lift up your heads, O Gates;
Be ye lift up, ye everlasting doors
The King of Glory will come in.

This very intertextual poem is drawn largely from Paul’s treatment of death in 1 Corinthians and Psalm 24, linking the idea of liturgically entering the Temple with the tradition of the Harrowing of Hell. As a Jesuit, it is likely that Hopkins would have read the following description of this tradition from an ancient homily:

Whenever I read the Terrible Sonnets, like we did together yesterday, I keep this poem in mind. It’s the ever present consolation even when all he could think was that “all / Life death does end and each day dies with sleep.” It’s that far-off yet continually arriving moment when his roots are finally given rain.

2 thoughts on “A Retreat with Hopkins: Holy Saturday”