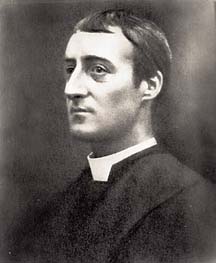 I was on a plane holding back tears. I came to Ron Hansen’s Exiles knowing every character would die. It is a book about a shipwreck, a book about a famous poem memorializing the deaths of five nuns in that shipwreck. I knew Hopkins would die. But in that moment when the first nun was lost to the sea, it hit me: I’m going to watch him die. I’m going to lean forward with Kate. I’m going to feel the pain of his winter world drawing to a close, more deeply than when reading any of the biographies. I’m going to hear afresh his final words: “I am happy, so happy.”

This past Monday, I was reminded again of Hopkins’ last moments. June eighth is the anniversary of his death, and the reminder made me think on his legacy and impact. Once an obscure Jesuit classicist teaching in Ireland, he is now included in high school literature books, like the one I found him in. What touched me most is that just a day before this anniversary, churches that celebrate Corpus Christi sang his poetic translation of Adoro Te Devote.

Bring the tender tale true of the Pelican;
Bathe me, Jesu Lord, in what thy bosom ran—
Blood whereof a single drop has power to win
All the world forgiveness of its world of sin.

Here Hopkins is as tender as the fabled pelican he mentions. The more formal Latin name, Jesu, is made intimate with its open vowel sound and softened J. The internal and yet wondrously capacious world, that winter world of his final poem, is met by an even more capacious, cleansing drop. It’s a translation, and yet it is quintessentially Hopkins, and people who may have never read one of his poems sang it this past Sunday on the eve of his death. I like to think that knowing this would have swayed his “spirits to peace.”

In all of this, Hopkins has instilled in me reverence for the mystery of failure. His works weren’t published in his lifetime. His friend, the poet laureate Robert Bridges, didn’t think readers were ready for them. He was passed over for continued studies in theology, remaining a spiritual coadjutor. He felt estranged from his family and his nation during his time teaching in Ireland. And in his poetry, this comes out as a sense of artistic sterility. He was “time’s eunuch” who wrote “lagging lines” and had lost the “fine delight that fathers thought.” All his hope was for his roots to be given rain, to know “one rapture of an inspiration.”

Brute beauty and valour and act, oh, air, pride, plume, here
Buckle! AND the fire that breaks from thee then, a billion
Times told lovelier, more dangerous, O my chevalier!

The pieces of his life buckle in this last moment and flame out. We get some of the best verse of the era, not only producing scholarship, but also inspiring Modernist poets. Much of my purpose comes from this man’s life. I started researching Victorians because of Hopkins. We never know what we’re really doing, who we’re serving. We never know when our roots are given rain.

And what did he do? He lived his life. He wrote, he graded, he died with nothing. And that was a billion times lovelier than if his life had been different. There’s really…

In this last moment, his life was a blue-bleak ember: the sad pieta of Kate and Manley holding their son. But it is in that moment when his joy gashes gold-vermilion. And over a century later, he’s made the tender tale of the pelican true for me.

Yeah, I know, we all need one now…

11 thoughts on ““I am Happy, so Happy”: Remembering Father Gerard”